I just came from sitting with a friend in the Baylor Emergency Department.  It reminds me how much medicine has changed since I entered it 50+ years ago. Finishing my training in 1972 I was scheduled to leave for Stanford medical Center and a residency in nuclear medicine. However literally at the 11th hour I decided that leaving my two young daughters in Dallas, even though her mother and I were divorced, was something that I could not do. And so several fellow residents at the VA hospital and a Methodist Hospital began forming a medical group that would be located at the nascent Medical City Dallas Hospital, being built by Trammell Crow and Bob Wright. Putting that group together as the Dallas Diagnostic Association is the most memorable job I have ever had. 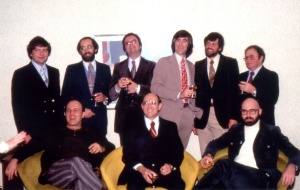 DDA original nineWe started from nothing and ended up two years later with the best single specialty group in Dallas. Creating the group was fun and being part of it was inspiring. Until the second generation doctors were recruited to join the DDA we were a creative group, willing to take risk.  As one of them later said “we took it away from you.” The fun ended, I left and spent the remainder of my career practicing more or less alone.

Now medicine is corporate, doctors have jobs, and more time is spent filling out forms than treating patients. A good example is the Ebola crisis which occurred at Presbyterian Hospital several years ago. The whole epidemic of Ebola in Dallas could have been prevented had a simple question been asked of the alpha case. “Have you traveled anyplace overseas recently?” But it wasn’t and several people died. Interestingly my 88-year-old friend in the Baylor Emergency Department from a fall was asked that very question, probably as a result of the Ebola episode. But for the three hours we were in the ER waiting for a room, at least five people (none doctors) entered and asked her the same questions about her medicine, her Medicare, did she have an advanced directive, etc.?  Apparently collecting information is valued but sharing it is not. We are wedded to technology and the doctor-patient relationship is mostly of historical interest now.

When I was practicing at the DDA and solo, before medicine changed I was a diagnostician. Patients came with a myriad of problems and my job was to sort them out, identify them, and either prescribe or refer them for appropriate treatment.

However, one of my regrets is that intellectual medicine takes a backseat to procedural medicine. Payment for thinking continues to be undervalued and thus underused. Three unusual cases come to mind that I diagnosed that probably saved lives -a case of *malaria in a college student returning from Mali (Timbuktu) that had not been diagnosed at the UCLA Medical Center;  a case of  *coarctation of the aorta in a young woman who had almost died in childbirth; and an *insulinoma in a middle-aged woman who was having fainting spells. The malaria was treated with medication. The coarctation of the aorta and the insulinoma were treated surgically.

Taking complex medical problems, finding the right diagnosis, and prescribing the correct treatment was the most satisfying medical job I ever had. That may still occur in medical schools but even they are now driven by the profit motive. Technology trumps a history and physical.

I grieve for my former profession.

*Malaria is one of the most common diseases in the world, carried by the Anopheles mosquito. The malaria parasite injected into the body by the mosquito causes fracture of red blood cells, fever, and untreated organ failure and death. One of the biggest prizes in public health is a way to prevent malaria, especially in Third World countries.

*An insulinoma, or beta cell tumor of the pancreas is an insulin secreting benign tumor resulting in excess of blood insulin driving the blood sugar down and causing people to become weak and faint.

5 thoughts on “I didn’t leave medicine. Medicine left me.”